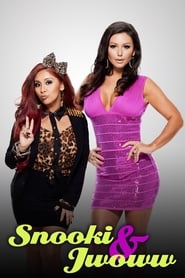 Snooki & Jwoww, sometimes rendered Snooki & JWoww or Snooki & JWOWW in print and online sources, is an American reality television series on MTV starring Nicole ”Snooki” Polizzi and Jennifer ”JWoww” Farley. It is the first of two spin-offs of Jersey Shore, on which both Polizzi and Farley previously gained fame as cast members. The series, which is executive produced by Jersey Shore producer SallyAnn Salsano of 495 Productions, is described by its stars as a modern-day Laverne & Shirley. The first season focuses on Polizzi and Farley living together in a former firehouse in Jersey City, New Jersey, though Polizzi’s pregnancy, which was confirmed during filming of the first season, led to a change in episode content and tone that would distance it from the party-oriented antics of its parent show. Filming began on the first season February 25, 2012, and lasted five weeks. The series premiered June 21, 2012. A second season was confirmed on August 3, 2012, and premiered on January 8, 2013. On April 25, 2013 MTV renewed the series for a third season, which will premiere on October 22, 2013. The show’s theme song is ”I Love It” by Swedish DJ and synthpop duo Icona Pop.